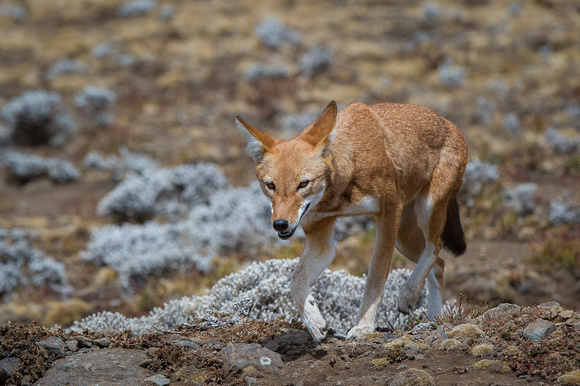 The Ethiopian Wolf (Canis simensis) is Africa's most endangered carnivore and the rarest Canid worldwide. This female was photographed at 14,000 feet in the Bale Mountains National Park, last stronghold for these wolves. There are fewer than two-hundred and fifty adults left here and less than two hundred other adults found in a few scattered mountainous regions around Ethiopia. The estimated total population of adult wolves is less than four-hundred and fifty. The wolves prey on the giant mole rat and a few other species of endemic rodents. Because they are so specialized in their diet, the Ethiopian Wolf is only found at cold altitudes above 3000 meters. If you wish to help make a difference for this species before it is too late, go here: www.ethiopianwolf.org/help.shtml .